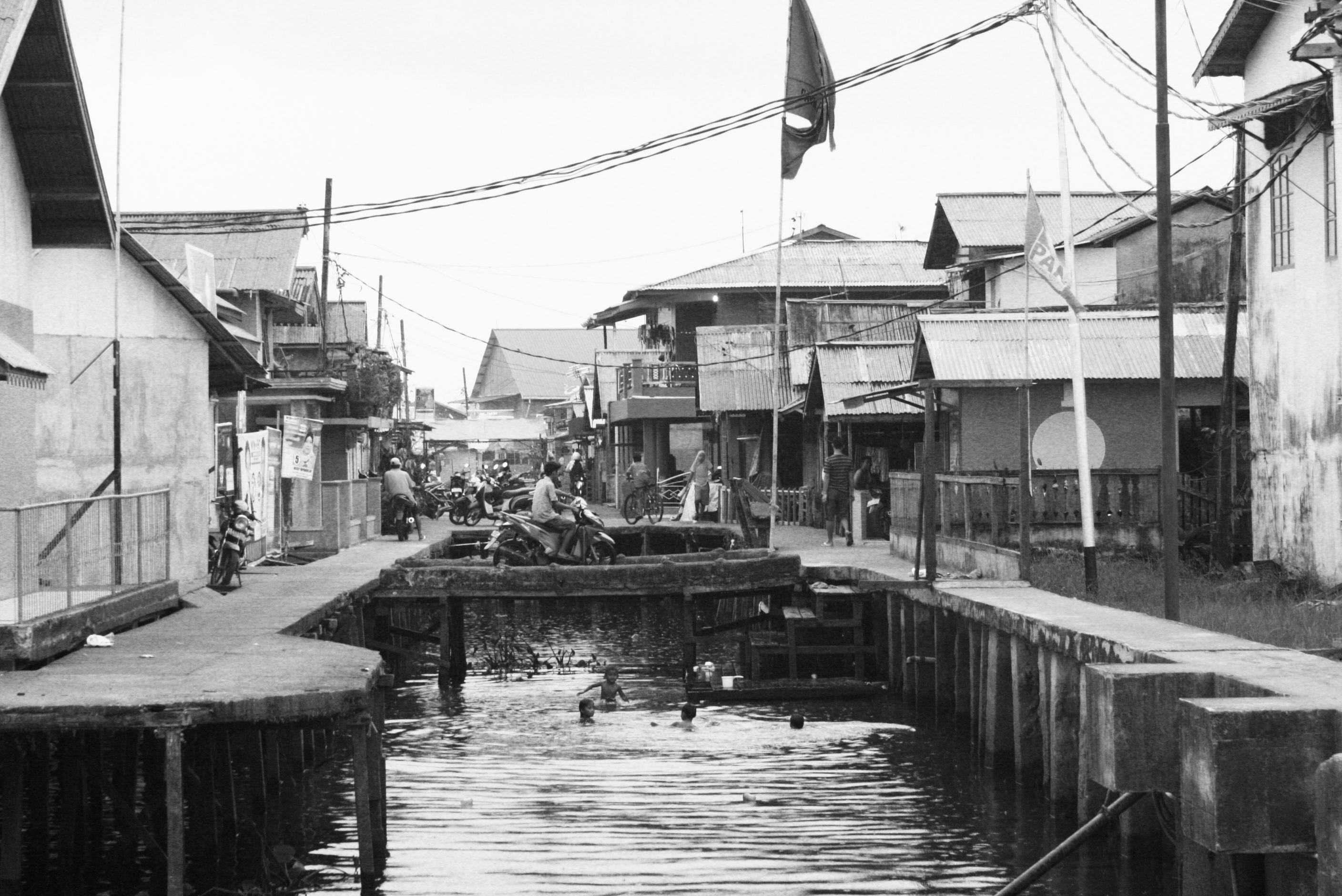 text and photographs: Sheila Nurfajrina,
graduate of Architecture at Cracow University of Technology

Indonesia is one of the countries in the world with abundant water resources. As a maritime country, almost 80% of Indonesia territory is water.

Pontianak is the name of the city in Indonesia, located in the western part of Borneo, the third biggest island on earth. Pontianak is the capital of the Indonesian province of West Kalimantan, founded by Syarif Abdurrahman Alkadrie as a capital of Sultanate of Kadriyah on 23 October 1771. Pontianak occupying an area of 107.82 km2 in the delta of the Kapuas River. It is located on the equator, hence it is widely known as Kota Khatulistiwa (Equatorial City).

As a river bank, the existence of water life on the socio-cultural values of the Pontianak community is implemented in the form of the spatial pattern of the city. Canals are one of the elements that play an important role in shaping urban spatial patterns. Unfortunately, as mentioned in the Pontianak City Plan and Report, most of the canals in Pontianak are currently in poor condition which implicated the quality of the urban space.1
Based on the issue of water crisis experienced by the community both globally and regionally, the provision of clean water is one of the agendas of the government. Though this city has the longet river compared to another city in the country, water problem such as drought and flood are two things which always come every year.

Water as a source of life plays a very important role in maintaining the balance of the environment and our earth. In recent years, various discourses and literature on water issues have been widely known to the public. One of them is the scarcity of clean water. As written in the UN journal regarding the action “Water for Life 2005-2015”, water scarcity can be categorized into three parts: water stress, water shortage and water crisis. 2
Water stress is the difficulty in accessing clean water for a certain period of time and could lead to further deterioration in environmental quality and damage to available water resources. The second condition of water scarcity is lack of water, which is caused by a drastic climate change and can cause drought, floods and other disasters resulting from increased pollution, increased human demand and inappropriate use of water. The third is water crisis,;it is a situation where water is polluted in an area so that people find it difficult to get clean water. Scarcity of water is caused by the unbalanced demand for clean water.

Water scarcity can be the result of two mechanisms: physical water scarcity based on natural factors and the geographical location of an area, and the second is economic water scarcity caused by poor management of available water resources. According to the United Nations Development Program, poor water management and making it difficult for people to access clean water sources in general is a cause of water scarcity experienced by a country or region.

Indonesia is one of the countries in the world with abundant water resources. As a maritime country, almost 80% of Indonesia territory is water. Hundred of rivers and lakes are spread in almost all regions of Indonesia. But apparently this condition does not make Indonesia free from water problems. According to a study conducted by Unicef in 2012 entitled “Clean Water, Sanitation and Hygiene”, Indonesia has launched a program to increase the supply of clean water and sanitation known as the Millennium Development Goal (MDG), a plan to decrease the amount of water shortages in the population up to half by 2015. To achieve this, Indonesia needs to achieve an increase in access to clean water to 68.9 percent and 62.4 percent for sanitation.

In connection with the MDG discourse, in reality at this time Indonesia is not leading the right path to achieve its goals in improving access to clean water and sanitation. Clean water services in urban areas in Indonesia until the year 2000 reached only 39% or 33 million inhabitants, and in rural areas only 8% or 9 million population, so that if calculated as a whole - only reached 47% or 42 million Indonesian population. This situation illustrates that clean water services have not been felt evenly and enjoyed by most people. Most people still use river water, lakes, water sources, or only rely on rainwater without an adequate filtration process.

Canal (Kanaal = channel, in Dutch) is one of the ways to overcome water problems and make it easier for people to access water. The canal was not used only as a water channel, but also as a transportation route. However, these canal networks are no longer properly maintained and utilized. Shifting modes of transportation, habit of disposing garbage in canals and changing patterns of consumption of the people cause the condition of the canals to get worse.

In a city formed and surrounded by water, water is no longer the main focus and is not even a variable considered in the collection the decisions and daily activities of the people. In the dry season, the city of Pontianak does not safe from drought. This of course raises the question of why drought often even occurs routinely in the middle of this city. Opposite conditions occur when the rainy season arrives.

Meaning of the river

There is one interesting way of thinking of Indonesian people in terms of the river. As we live by it side by side, people in Indonesia treat the river as a backyard of their houses.

Backyard here means that they use the water for cleaning, bathing, and throwing garbage. On the other hand, for some people who are not able to buy clean water, they could use the water from the river for cooking and daily consumption.

Based on data obtained from UNDP, West Borneo occupies the 6th position as one of the lowest provinces with a percentage of less than 40 percent in terms of providing access to clean water and sanitation for its people. 3

This condition is not much different from cities in other regions in Indonesia which generally use river water as their raw water source. The river water in Pontianak city is increasingly polluted by the people themselves by throwing litter and making the river a place for household waste disposal, factory and so on.

In addition, the community is faced with environmental changes caused by human activities, one of which is using water catchment areas for buildings.

Hey speed boat
The speed boat goes downstream to the upstream
Kapuas River
Is a very long river across the city
Hey, who ever guess
It was a forest and now it is a city
With many people living there
The city is named Pontianak
The Kapuas River has a story
If we drink the water
Even if we go far, wherever we are
It’s really hard to forget
Hey Kapuas
Hey Kapuas

Canals of the city

Starting from how a city treats water both in its spatial structure and socio-economic context, the civilization and dynamics of cities in the world are built. The existence of water is closely related to humans who are always trying to use water as one of their basic needs. In spatial contexts, this is closely related to typical natural conditions or potentials; that is, by the rivers that divide the city.

Natural conditions with these rivers then make several cities in the world use the canal as the embryo of a city development. Canalization in various regions in the world is one of the efforts to solve the problem of water that connects water to life of people on the land, with which water can be more affordable even through spatial elements of the smallest scale.

In the urban context, water and canals are one unity. Canals are the way to connect the river up to the settlements or citizen’s houses.

As Borneo is one of the islands covered by forest up to 80% of its area, forests in Borneo provide the possibility for water to be kept in good condition and reach the community, reducing or even eliminating the risk of drought in the dry season and flooding in the rainy season as it stores the water. On the other hand the forest also improves soil quality and increases its absorption.

Local Scale
In the local sphere, it is focused on the location where the design will be placed. Water infrastructure works as a water treatment plant for humans while improving environmental conditions.