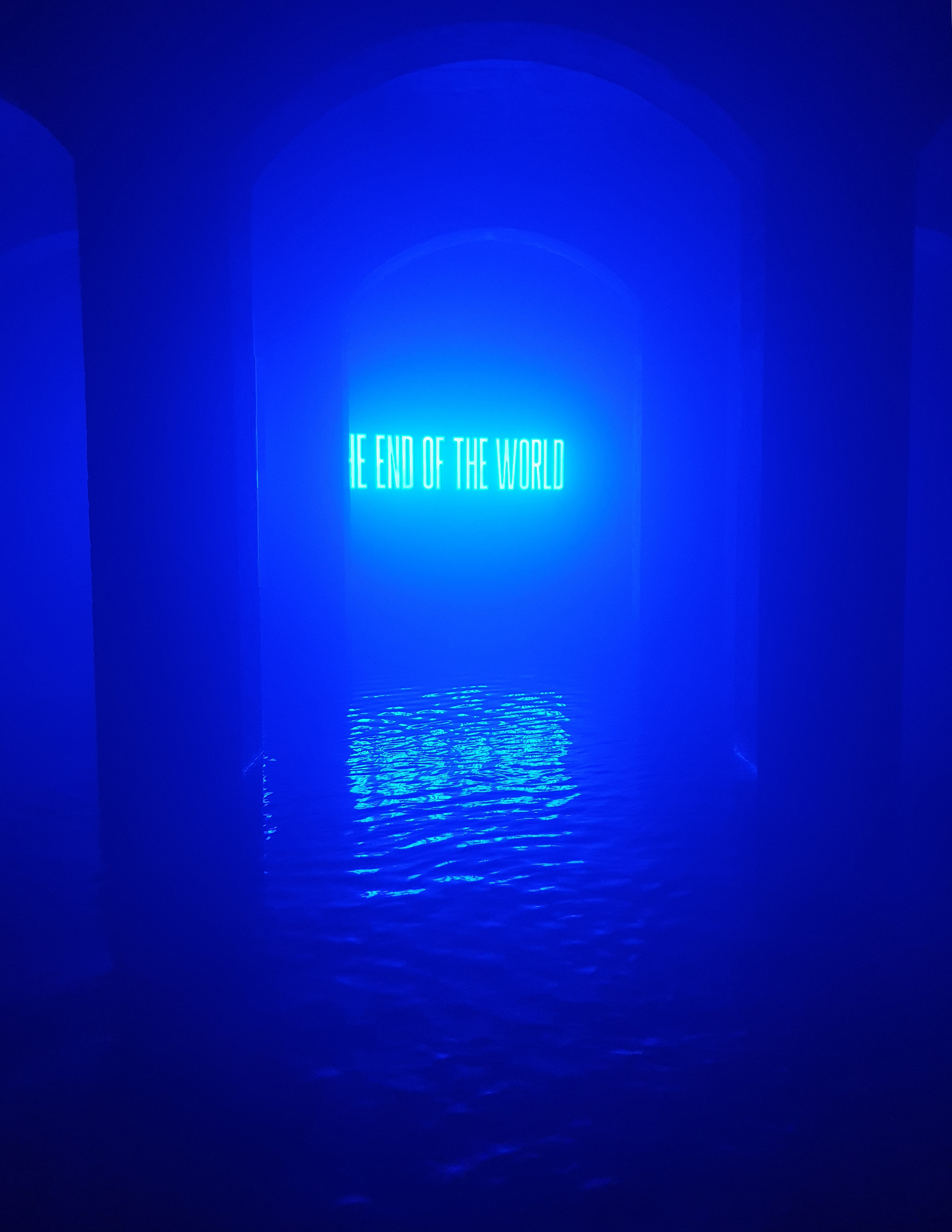 English proofreading of the articles on behalf of the SARP Krakow Branch:
dr inż. arch. Marta Anna Urbańska
Original English texts were delivered by the authors.

At the very beginning it was bright. Fluorescent light fell on the concrete walls and passed through arcaded openings, gradually disappearing with each subsequent line of columns.
It was also dry. I discovered this when I took off my shoes: the rough floor was warm and pleasant to the touch. It was part of the ritual entry into the inside - getting rid of everything unnecessary, to maximise the feeling of space. I realised that brightness is out of place here. Penetrating light is dead and deaf. Bare architecture without any secrets. Nevertheless, it has certainly been used here deliberately to enhance the contrast of what was about to happen.

Despite the lack of indication, I instinctively moved towards the dark. Step by step the brightness mixed with the mist and slowly gave way to the place of darkness, which was not oppressive, did not take my breath away, but on the contrary - it gave me freedom to make decisions and revealed layers of meaning in space. It enhanced the sensation.

It was not even dark at that moment. It became the background for the events taking place, the frame that brings out the play of lights between arcades, the medium between atmosphere and architecture. I was an integral part of it, a silent observer whose eyes began to see a multitude of halftones and light reflections emphasizing the loftiness of the structure. A witness who noticed the repetitive arches not only in their physical position, but also in their plasticity and mystery.

The soundscape completed the impression. As the feeling of coldness increased, the air became heavier and more penetrating and the sound fuller. It seemed indistinct and quite distant, and yet so tangible that I lost myself in listening to these elusive tones, until they began to penetrate my skin and get deep inside, immersing me completely in this mystical experience. I walked forward slowly, silently, trying to reduce my presence to become only a recipient, absorbing space with all senses, feelings. My mind was in a state of elation, clouded by the unreal setting around me until I felt a shivering cold through my whole body. Immediately brought back to reality, I felt a damp surface under my feet, and my toes dipped into the water. A few steps further the water was up to my ankles. I stopped. I was in the middle of a clear mirror whose reflection was an extension of the walls; an infinite surface, by which the sound echoed deep into the interior. Water was a unifying medium between me and architecture. However, with only one the most delicate movement everything was immediately agitated, when the vibration of water broke the communication with the reflection, noise appeared. The sound materialised, became close and clear, dominant and disturbing. However, I quickly realised that my presence did not destroy the space at all, but was accepting it: step by step I entered into dialogue with it; I complemented my sound, I was an integral factor shaping the interior. From a silent recipient I became a creator responsible for the soundscape.

This experience was accompanied by a glow just above the water, which uncertainly emerged from the darkness: dim, pale pink light touched the walls gently, then sliding down below the surface of the water, created a flickering glow. After passing a few meters it appeared again but completely transformed - aware of its expression, it turned into a light beam, which boldly illuminated the moment of culmination of the entire passage: something seemed to grow out of the concrete wall, an organic extension, a living organism. It was characterized by expression of form, but at the same time it seemed extremely delicate and fragile. It was made of pearly white drops of water that fell from the ceiling and solidified into a petrified sculpture. However, this was not the only place: after a while I noticed that the perfect curvature of the arches and the verticals of the walls also had an organic contour in places.

The architecture was changing, that was for sure. It gave birth to something, changed its form.

Left alone, it began to drill its own corridors and to build. This was undoubtedly a spectacle of the birth of architecture again. On its own. From nature. From water.

Steps led by unsatisfied curiosity led me further, deeper into one of the corridors from which the sound started to be audible: I wandered in total darkness, and the sound was growing, becoming more and more pronounced, touching me. I let myself be guided through my hearing and mixed feelings that filled me: calm and uncertainty, unity and seclusion, openness and interference. Gradually it got colder. I do not know if it was associated with a decrease in temperature or with a pale blue shade of light that filled the corridor. The contrast became stronger and the light became clearer. I knew I was close.

After a while I found myself inside a column room. It was filled with a dim blue fog that served as the background to the music and enveloped the entire space. It also enveloped me. I became an integral part of it and no longer did I know what water, what air, what light, or what wall it was. All this was architecture for me, here and now. It was discovering myself, understanding my senses and the components of space. Experiencing.
After a while I saw a white light clearly emerging from the blue background and flashing on the surface of the water. I came closer. It was blurred, timid, fleeting. It seemed to be trying hard to define itself in some form, but it could not, still sliding on the water. There was inexplicable warmth and hope from it. I raised my head. I saw The end of the world.