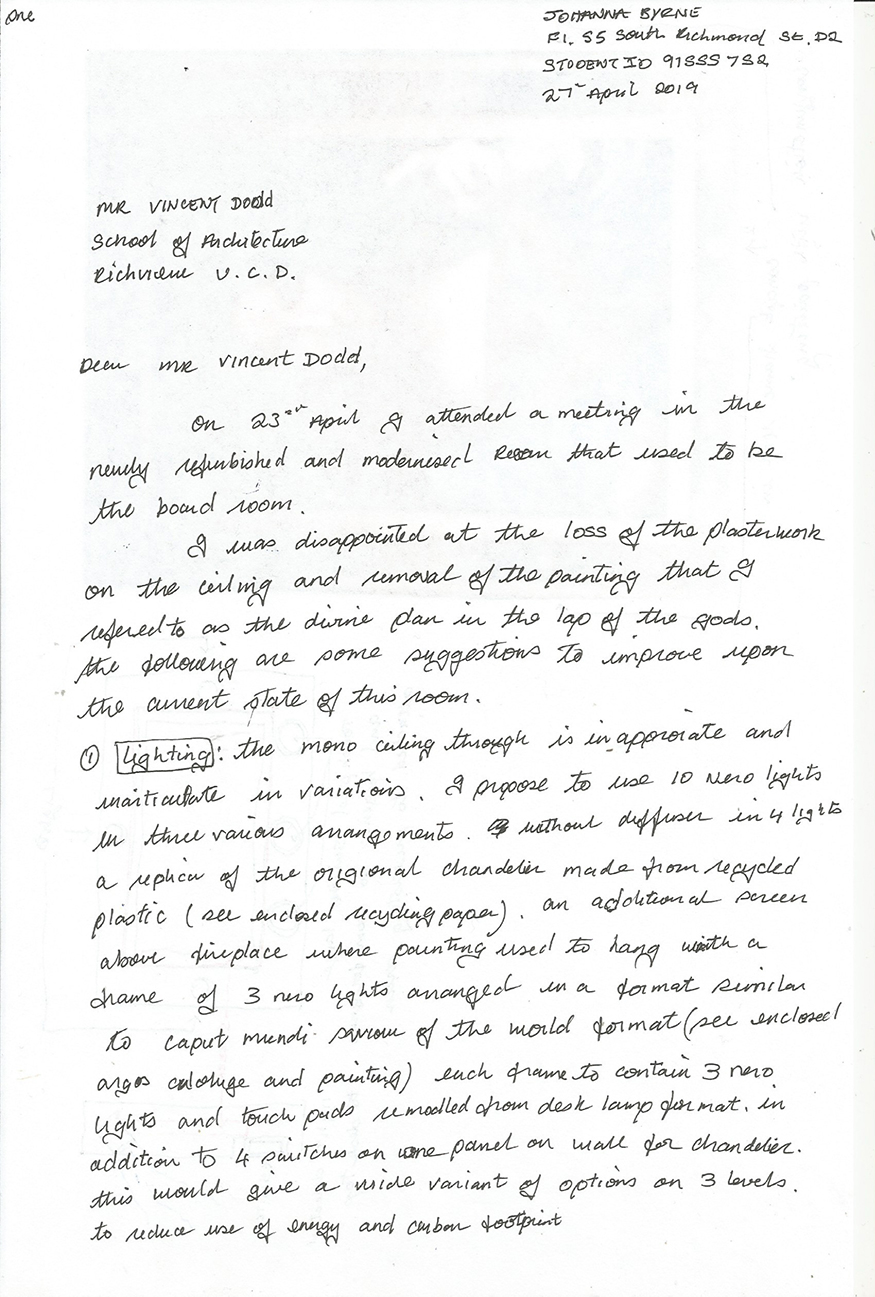 On 23rd April I attended a meeting in the newly refurbished and modernised room that used to be the boardroom.
I was disappointed at the loss of the plasterwork on the ceiling, and the removal of the painting that I used to refer to as the divine plan in the lap of the Gods.
The following are some suggestions to improve upon the current state of this room. The mono ceiling trough is inappropriate and inarticulate in variations.

1. LIGHTING: I propose to use 10 Nero lights in three various arrangements. Without diffuser a replica of the original chandelier made from recycled plastic (see included Recycling paper).An additional screen above fireplace where painting used to hang with a frame of three Nero lights arranged in a format similar to Caput Mundi Saviour of the World painting format (see enclosed Argos Catalogue and painting, each frame to contain three Nero lights and touchpad’s remodelled from desk lamp format. In addition to four switches on one panel on wall this would give a wide variant of options on three levels to reduce use of energy and carbon footprint.

2. FLOOR FINISH: The current floor finish in blue carpet is inappropriate, while it complies with Thermal transmission and sound reduction it may have foam underlay like the foam seating in the Stardust fire. It is also at risk of infestation from lice, fleas and ticks, disease control and Health and Safety requirements. My suggestion for an alternative would be to clad the original varnished timber floor with concrete tiles, cast in Perspex lined formwork with an inner layer of thin wire mesh, laid upon mdf or plywood to protect against deflection and cracking (see enclosed details) tile size in module according to room dimensions.

3. AIR: As this room is historical it is not fully compliant with the number of air changes per hour required for compliance. As an undergraduate student there was a discussion about this with proposals for brick vents and underground J’s and hooks undesirable as it is not appropriate to puncture the building fabric. An additional suggestion would be to use the external skylight to create a wind tunnel this would provide two or three vents within the room along with opening the main front house door. To create a wind tunnel the room door is left open to create a wind tunnel from the main front door. Additional ventilation would increase the useable space within the room and bring it into compliance with the required number of air changes per hour. The new board room might also avail of additional ventilation. Door swings may require adjusting depending on the thickness of tiles and underlay. If 10 15 or 20mm removing a slice from the underside of the door may suffice along with chamfered door saddle if thickness exceeds 20 or 30 mm door may need to be re hung to open outwards.

4. TECHNOLOGY VENTILATION: At present there is one table in hygienic Formica finish of sienna with ochre chairs, in the centre of this table is what appears like a steel letterbox, perhaps this is for ventilation for computer equipment stored within table with increased air flow. I would propose moving this table to room centre aligned with new screen above fireplace, with a clear perimeter on all four sides, the steel void could be used to project 3D hologram models of building feasibility studies along with drawings and images displayed on new screen. The square shape of this table is better suited to island format. A new additional longer rectilinear table with ventilation ducts aligned with air flow for electronic equipment protection and cooling below the table surface, this new table would look nice in blue with gold vent ducts similar to the clothes in the painting the surface of table could be used for refreshments without risk of damage to electronic equipment (see sketch) with a Formica finish like existing table.

5. CEILING PLASTERWORK: At a later date a tracery replica image of lost ceiling plasterwork could be installed in image format, computer generated pointillism graphic image or screen printed for adhesion to ceiling giving a tromp d’oil 3D image of original plasterwork, later again recycled plastic pieces could be made and attached for a tangible 3D relief replica of the original plasterwork. The above five suggestions were discussed with Aishling Murray in the room while waiting for Orla Hegarty, Erin O Malley and Aishling O Grady to arrive and commence meeting, the entire ensemble was to symbolise the spirit and ethos of UCD emblematic in the UCD crest with the blue and green represented by the sky and foliage visible through the windows and the gold metalwork and crystals of the chandelier symbolic of the Irish harp visible on the UCD crest. With the three castles represented via the models of buildings projected through holograms. The ancient and modern in correlation and constructive collaboration. Do not hesitate to contact me if you require any further information.